Multifamily has been a darling of the real estate investment world for years now. Investors, large and small alike, are pouring an unprecedented amount of capital into the sector. 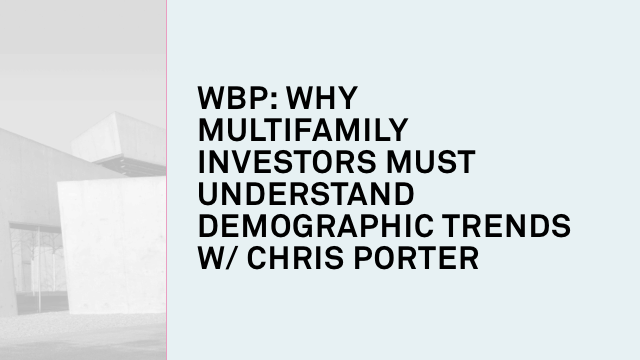 And with good reason.

The projected trajectory of multifamily real estate is strong. This is largely due to nationwide demographic trends that are creating a sustained demand for multifamily properties.

In this article, we examine some of these trends that have multifamily well-positioned for continued growth well into the future.

Nevertheless, the U.S. population is growing, even if not as quickly as in years past. Since 2010, this has translated into at least 2.3 million additional people living in the U.S. each year.

These people all need somewhere to live. Moreover, many of these recent additions are immigrants from other countries. Historically, immigrants will rent for extended periods of time while they establish themselves here in the U.S.

As long as population growth continues, and is supported by the growth of immigrants moving to the U.S. The demand for multifamily housing will remain strong – particularly in “gateway” markets like New York, Los Angeles and Miami.

However, it is worth noting that population growth is far from uniform. In fact, recent U.S. population growth has proven to be both diverse and decentralized. There is no “face” of an American renter today. They are equally likely to be Black, Latino or Hispanic, or Asian American as they are white.

Moreover, the population growth is occurring in places across the U.S. While some regions are experiencing faster population growth (e.g., the Sunbelt) than others (e.g., the Rustbelt). There are pockets of opportunity in all of these places for investors looking to grow and diversify their portfolios.

According to the U.S. Census Bureau, an estimated 10,000 Baby Boomers are turning 65 years old each day. By 2030, all Baby Boomers will be at least 65 years old. This means that by 2035, one in three households will be headed by someone aged 65 or older.

The aging of the Baby Boomers is going to have a major impact on housing. Especially as it pertains to the demand for multifamily housing.

There are several ways this will manifest. Many Baby Boomers will look to downsize. Already, many have sold their long-time family homes, and often, have significant equity in these homes.

For lifestyle and/or practical reasons (such as a general lack of inventory). Many of those who are downsizing are deciding to rent for the foreseeable future instead. After all, the vast majority of single-family homes are not designed to allow people to age in place, and renovating properties to allow people to do so can be cost-prohibitive. Instead, Boomers are trading square footage for newly constructed apartments that provide greater accessibility, such as elevators and single-floor living.

As evidence to that end, U.S. Census Bureau data indicates that between 2007 and 2017, the largest jump in the renter population occurred among those aged 55 and above. A staggering 38% increase in the number of renters compared to just 10% for those aged 54 and below. The numbers are even more dramatic when looking at those aged 65 and above, whose share of renters increased by 65% during that time.

Some Boomers will want to remain close to their adult children, especially if there are grandchildren involved. Others will seek out urban environments that provide tremendous access to retail, entertainment, healthcare and other amenities.

Others, still, will place greater emphasis on amenity-laden apartment buildings (regardless of location) as long as those buildings are designed to promote and foster social interaction, something that becomes critically important as people age.

In any event, it is important for multifamily investors to remember that the housing needs of those aged 55 is not the same as those aged 65, which are different from the needs of those who are 75. As Baby Boomers age, there will be demand for a range of multifamily products designed to meet these varying needs. Properties with units designed to accommodate all of these age groups will be in especially high demand in the years to come.

Trend 3: Millennials Priced Out of Homeownership

Millennials, or those born between 1980 and 2000, are entering a time in their lives when they would often be buying their first homes. However, Millennials have more so found themselves priced out of homeownership. There are several reasons for this, including a lack of affordable “starter” homes. Many Millennials are also plagued by significant student loan debt which has stopped them from be able to save for a down payment.

In turn, Millennials are opting to rent for longer than they might have preferred otherwise. This has and will continue to create prolonged demand for multifamily housing.

It’s not just Millennials who are priced out of homeownership. In general, there’s a dearth of affordable housing options for people of all ages.

Over the last decade, the median home price
rose roughly 30 percent whereas wages
increased just 11 percent during the same period.

For perspective: over the last decade, the median home price rose roughly 30 percent. Whereas wages increased just 11 percent during the same period. The numbers are even more dramatic if doing a 50-year lookback. Over the past 50 years, home prices have jumped 118 percent compared to wages, which have increased only 15 percent after being corrected for inflation rise.

To be able to reasonably afford a home in 2021, Americans need to earn close to $145,000. This is more than double the U.S. median household income of $69,178. This is also assuming they spend no more than 30 percent of their income on housing expenses, which is a common rule of thumb.

In some markets, people are having to spend 50 percent or more of their monthly income on housing. This is an economic term known as “housing burdened”.

One way to make housing more affordable is to shift the supply and demand equation. This would entail building significant new entry-level housing, something that just isn’t happening at any scale today. Construction costs have escalated, due to both labor and material shortages. This means even modest homes are selling for well above what most first-time buyers can afford.

In fact, the new construction of all housing types is well below where it needs to be. According to the U.S. Census Bureau, single-family home construction (at all price points) is running at its slowest pace since 1995.

For better or worse, Americans increasingly need a college degree (or higher) to be competitive in the job market. Therefore, not only are more Americans enrolling in higher-ed than ever before, but as enrollment increases, higher-ed costs correspondingly increase.

Between 1990 and 2020, the average cost of a college degree has tripled at public four-year institutions. This has left people, especially those in “Gen Z” saddled with student debt. The average person now graduates with more than $50,000 in debt.

This greater educational attainment, while theoretically good for the national economy, has many implications.

On one hand, it has created greater demand for both on- and off-campus multifamily housing. Many students view living off-campus as a right of passage, especially if living away from home for the first time.

Another implication is that recent grads often find themselves with hefty student loan payments. Especially those that often continue for years to come. While those with college degrees earn more than their counterparts. Still many struggle to save for homeownership while simultaneously paying off their student loans.

People with significant debt are more likely to postpone other life events, such as marriage and having children. Women, especially, are opting to focus on their careers before settling down and having a family (and understandably, they want to put those hard-earned, expensive degrees to work!). Couples who marry later often tend to delay home buying, opting to rent for longer periods instead.

Across the board, a widespread push for greater educational attainment has had the unintended impact of delaying homeownership. In turn, this has created sustained demand for multifamily housing – even among the most well-paid recent grads.

Before the pandemic, more flexible work arrangements were starting to gain recognition. However, it wasn’t until COVID-19 shut down the workplace that Americans truly adapted to working from home. Now, many months into a global pandemic that continues to rage on, more companies have come to accept that many employees prefer to work from home. Or at least, prefer some hybrid model that allows for greater flexibility.

This is expected to have a major impact on the housing market.

Greater workplace flexibility is expected to create
prolonged demand for multifamily as people delay
investing in homes and putting down roots.

On one hand, greater flexibility to work from home (at times or entirely) will allow Americans to pursue more affordable housing alternatives. Rather than paying up for a pricy, downtown apartment, some may opt to move further from the urban core where both home and apartment prices are lower.

On the other hand, the newfound freedom to work from home stull has many unknowns. Many people are waiting to see whether this flexibility continues post-pandemic, and if so, to what extent. This is causing many otherwise would be homebuyers to delay investing in a property where they may no longer want (or be able) to live one, two or even five years from now as remote work options continue to evolve.

So far, there seems to be a happy medium: people are moving away from especially pricy urban centers and opting to live in suburban areas. This has created a demand for amenity-laden apartment buildings that renters would often expect to find in urban areas, yet in suburban settings that offer more space per unit. This allows people the freedom to travel into the city for work as needed, when needed, but allows people to rent in suburban areas at a lower cost.

This is far from doomsday for urban multifamily apartment buildings. Many urban areas have widespread, pent-up demand (especially among Baby Boomers). As some renters flee for the suburbs’ greener pastures, there will be others who use this as an opportunity to move into urban apartment buildings given their proximity to the many amenities downtown areas offer.

Moreover, while many people will have the flexibility to work from home on an ongoing basis, there are many core jobs and services located in urban areas where employees will need to remain in-person (think: retail, hospitality, health care and more).

In short, greater workplace flexibility is likely to drive ongoing demand for multifamily housing as people delay buying homes and settling down.

A final, perhaps anecdotal trend, is that as more people opt to rent for longer periods of time. Renting will become increasingly accepted for all Americans, regardless of where they are in their life cycle. Societal “norms” about who should be buying a home, in what types of neighborhoods, and when are becoming less prominent.

Millennials, in particular, no longer face the same pressure to buy a home that other generations felt in years past. People have begun to recognize that certain demographic trends put homeownership out of reach, at least temporarily. As people get used to renting, it is expected that others will do the same.

The demographic tailwinds bolstering
the multifamily industry in recent years are expected
to continue – even exacerbate – in the years to come.

This has already created increased competition for multifamily assets. While yields have correspondingly compressed, the industry’s long-term prospects make multifamily a strong consideration for anyone looking to diversify their portfolios by investing in real estate.

Here at Smartland, we continue to closely monitor the demographic trends influencing the multifamily real estate sector. Contact us today to learn more about how we evaluate investment opportunities based on the shifts we’re seeing in the marketplace.

9 Tips for a Quick Apartment Turnover to Minimize Vacancy

9 Tips for a Quick Apartment Turnover to Minimize Vacancy

Congress May Eliminate “Backdoor” Roth IRAs – What This Means for Investors