Passive real estate investors will often find themselves bombarded with various deals to consider. Making sense of each opportunity to buy investment property can take time. Evaluating deals is some combination of art and science. Understanding the nuances of the local marketplace, competition, etc. is the art. The science involves digging into the numbers and deciphering each deal’s return on investment.

There are many ways to evaluate a deal’s return potential. Some of the most common real estate investment return metrics. Such as cash-on-cash-return, annual average return, equity multiple, and IRR; are all calculated differently. What’s more, these numbers may matter more or less to an investor depending on their specific investment objectives.

Investing in real estate is a great way to get started if you’re interested in earning passive income.

In this article, we examine the most common metrics used to evaluate commercial real estate returns.

The Four Most Common Metrics Used to Evaluate CRE Returns

The CoCR is defined as the annual return that’s based on your invested amount. The formula is as follows:

CoCR is the preferred metric by many investors. This is simply because it allows them to easily compare a real estate deal to other investment alternatives. For example a stock’s performance during the same period.

It should be noted, that the CoCR is used to express the average returns over the lifetime of the deal. Therefore, many prospective investors will see deals advertised with CoCR’s that are provided as a range, such as 10-12%. The actual CoCR earned in any given year depends on the net operating income and expenses, which can vary from year to year.

Moreover, the CoCR does not account for any profit earned at the exit of the deal. For instance, using the example above, if the sponsor sells the property and investors earn another $50,000 upon sale, the CoCR does not capture those proceeds. If the sales proceeds were included. This would then amplify the total return on investment.

In that same regard, another limitation of CoCR is the cash flow. Any cash flow that is earned earlier in the hold period, may be less than what is earned after value-add improvements are made. This makes it imperative for investors to look at the target distribution schedule across the lifetime of the investment. If someone looks at the CoCR in the early years of an investment, it may look less attractive than the latter half of the hold period.

The AAR is defined as the total return averaged throughout the life of a deal. The formula for AAR is as follows:

Total profit includes total cash flow (NOI minus operating expenses) as well as any proceeds from the sale of the investment property.

The AAR is generally calculated using a 3, 5, or 10-year period.

The Annual Average Return (AAR) is defined as the total return averaged throughout the life of a deal.

For example, a deal may lose 50% of its value in Year 1. However, it may have a 100% return in Year 2. This is after the property improvements have been made. This would be an AAR of 25% per year—even though the investor hasn’t really “earned” anything; they’ve simply broken even at the end of Year 2. In this case, the annualized total return would be 0% after two years.

The equity multiple, or EM, is defined as the accumulated multiple of your investment at the end of an investment cycle. The formula is as follows:

Simply put, another way of saying a 2x multiple is that you just doubled your money. You might also say that you received your initial investment back, plus 100%.

One of the benefits to using EM is that it accounts for all sources of income. This includes the future value of the property (the sales price), cash flow distributions, and any interest or preferred return paid on capital.

A key consideration when using EM is that it does not tell you how long it took you to earn that return on your investment. For instance, one might argue that a 3.25x multiple earned in 8 years is not as attractive as a deal that earns a 2.5x multiple in just four years.

IRR is by far the most difficult investment metric to understand relative to the other real estate investment return metrics featured here today. This is because IRR is grounded in the economic principle known as the “time value of money”.

Essentially, the time value of money principle assumes that a dollar earned today is more valuable than a dollar earned in the future. This is because over time, inflation cuts into the value of that dollar. Additionally, there are opportunity costs associated with earning that money later in time.

In short, while IRR is the most difficult return metric to calculate, it is also the most thorough. This is because it takes into consideration when each dollar of profit is earned, and accounting for that accordingly. The sooner someone earns that money, the sooner they can re-invest it and put that money back to work.

The “textbook” definition of IRR is that it is a discount rate that generates a net present value (NPV) of zero for all streams of future cash flow.

Rarely will anyone calculate the IRR using pen and paper. It’s simply too complicated. Instead, people will generally use Excel or an investment calculator to calculate IRR.

The best way to understand IRR is by looking at a few scenarios.

This translates into a 14.9% IRR for Scenario A and a 20% IRR for Scenario B. This is a rather dramatic jump in IRR since both deals had the same 5-year hold period and same total profit. However, the IRR in Scenario B is higher because the investors received their returns sooner.

IRR, often considered the “gold standard” of investment metrics, has its own limitations. Consider the following.

IRR is the most difficult investment metric to understand
This is because IRR is grounded in the economic principle
known as the “time value of money”.

First, sponsors can easily manipulate IRR. For example, they can take on additional debt to boost IRR. This can be problematic if the sponsor becomes too highly levered amid a market correction. This can wipe out investors’ equity and cause the IRR to plummet.

Similarly, sponsors may take out short-term credit facilities to delay making capital calls. In delaying when “committed” capital is invested. It shortens the “investment” period. Therefore boosting the IRR.

Here are a few other key considerations for passive investors trying to make sense of these different metrics.

Naturally, most investors will want to know which of these metrics is “best” to focus on. Yet in practice, none is inherently “better” than the others. Each is important for its own reasons, and all should be used in conjunction with the others.

It’s also important for investors to utilize these metrics in the context of their own goals. For example, someone may prefer to earn a larger overall return (EM), regardless of when that return is earned (lower IRR).

There may be unique reasons to prefer earning returns at one time vs. another, especially as it pertains to tax saving strategies. For example, someone may be carrying forward a large loss related to the depreciation of one asset and may need to apply that depreciation to other passive income sooner rather than later. Another investor may expect to move from one tax bracket to another in a few years, and therefore may prefer to earn a lump sum at a later date. 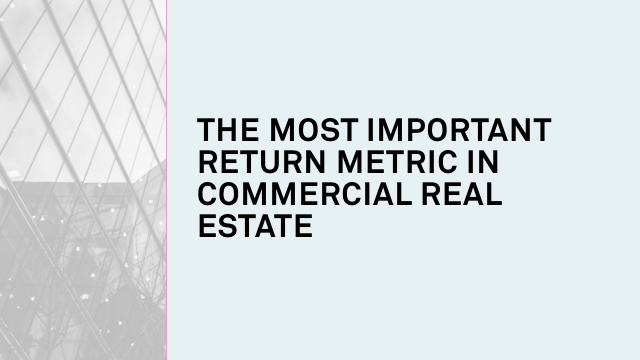 In any event, investors must understand how these metrics are calculated in order to evaluate deals with confidence. Understanding the nuances of each will allow investors to weed out the good deals from the great deal. What’s more, they’ll be able to steer clear of potentially bad deals altogether.

If you’re interested in earning passive income, a great way to get started is investing in real estate. Many sponsors allow people to invest with as little as $25,000 to $50,000. Depending on the type of deal, some investors will be able to double their money (or more!) over the course of the hold period.

The key is investing with an adept sponsor who has a proven track record.

To learn more about Smartland’s investment platform, including how we calculate potential returns and deal profitability, contact us today!

Should You Choose Preferred Equity or Mezzanine Debt for Real Estate?

Should You Choose Preferred Equity or Mezzanine Debt for Real Estate?

Single-Family vs. Multifamily Investing – Which is Better?

What Are Class A, Class B, and Class C Properties?