One of the easiest investment analysis formulas to leverage is the debt-service coverage ratio or DSCR. This basic but informative formula can help you grasp whether a property is a solid investment. Or alternatively, if it’s too risky to be added to your portfolio.

Let’s break down what the DSCR is, how to use it, and whether it’s the right analysis tool for all situations.

The debt-service coverage ratio measures how well an entity can afford to repay its debt obligations based on its current cash flow. “Cash flow” in this scenario is referring to the money currently coming into an investment or company through profits or other investors now. However, this is not projected cash flow or eventual profitability.

For example, imagine a company that took out a loan from a startup financing firm to get the ball rolling on its operations. The DSCR breaks down how much of that company’s cash flow can be used to pay short-term debt payments. Such as minimum payments plus interest.

Or imagine a commercial real estate property up for investment. The DSCR will tell you whether the building’s cash flow can be used to pay for its debt expenses in the short term.

However, the DSCR doesn’t tell you whether a company, investment, or individual can pay their debt obligations in the long term. It’s purely used to determine whether a borrower can afford to make short-term debt payments.

Why is the DSCR Important?

However, a low DSCR doesn’t necessarily mean that a company is at risk of bankruptcy. Or that a property is a bad investment. The DSCR is just one type of measurement you can perform.

Furthermore, lenders evaluating a company’s DSCR should evaluate that ratio against the DSCR of similar investments. Ones that are specifically operating in the same industry or capacity.

In other words, the DSCR is somewhat subjective. It can and should be used in conjunction with other financial wellness metrics to do an in-depth analysis.

The DSCR for Individuals

Individuals may also need to know the DSCR for their income and debt levels when applying for certain large loans. For example, mortgages. For personal finance, for example, banks may use the DSCR to determine whether a borrower is a good fit for a mortgage loan or any other type of financing agreement.

The DSCR for the Government

The government can also use the DSCR as a financial measurement tool. In this context, the DSCR measures the amount of export earnings a country needs to meet its annual principal payments. Including interest on any external debt.

In order to use the DSCR for your own analysis. Or to grasp how investors may evaluate you or your company. It is important you understand the DSCR formula. 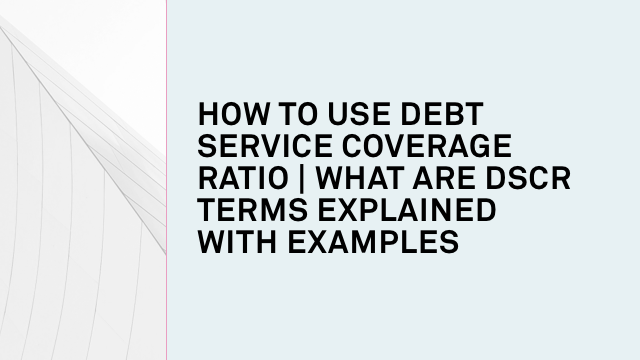 The debt-service coverage ratio when broken down shows how well (or if) an entity can pay their debts with their current level of income or cash flow. In order to calculate this ratio, you need the net operating income and total debt service for the entity or company in question.

The DSCR formula is:

In this formula, the net operating income:

Note that, in this context, the net operating income does not include taxes or interest payments that may deduct from operating expenses under other circumstances.

The total debt service, meanwhile, is just any current debt obligations the company or entity faces. This includes interest, the principal, sinking funds, and/or lease payments that are due over the coming year or timeframe you’re calculating the DSCR for.

One quick way to calculate the total debt service is with the following formula:

Most people learn by doing, so let’s break down an example of the DSCR in action.

Say that you want to purchase an investment property. For example a multifamily rental building, that produces $600,000 in annual net operating income. The property’s debt service is $500,000 per year. Plug those numbers into the above formula and you get:

If the DSCR is 1.2, that means the property can cover its total debt 1.2 times over the current year. This is assuming that the debt obligations do not increase.

Naturally, a DSCR of less than 1 is not as reassuring for lenders. Nor is it a good ratio for borrowers. Imagine the same property with the same annual net operating income, but a larger debt service of $650,000 per year. Plug those numbers into the formula and you get:

This tells you that the DSCR indicates that the property can’t cover its debt obligations over the next year. It will eventually need to take on another type of debt to cover the expenses or will need to increase its NOI somehow.

What Does the DSCR Tell Lenders/Borrowers?

At its core, the debt-service coverage ratio tells investors whether a property, person, or company is a good investment. Given of course their current net operating income and debt expenses.

For example, a person applying for a mortgage to a bank with a high DSCR. Let’s say, 1.4. It may be a good investment since their income indicates they can pay all their current debts more than once over the next year. They probably have a lot of disposable income or practice good money-saving habits to keep their debts down.

On the flip side, the DSCR can also tell investors if a particular investment is a bad idea. If a company has a DSCR of 0.8. That means that it doesn’t bring in enough revenue to currently cover its debts. It needs new investments badly, which could cause the company owners to take drastic steps or even lie to investors.

That said, a low DSCR is not necessarily a bad thing. For example, startup investors or angel investors are often accustomed to investing in companies with a DSCR of less than one. For many companies across industries, it takes quite some time before profits really get going and before debts become manageable. Until that time, such companies rely on frequent cash injections to stay afloat.

Because of these factors, the DSCR analysis only goes so far. Investors or lenders must also use context and their own judgment when determining whether a DSCR is good or bad relative to other companies or entities in the same situation.

What is the “Ideal” DSCR?

The “ideal” DSCR is heavily dependent on the lender and asset type. In general, lenders will look for a DSCR between 1.25 and 1.5. Often with plenty of variation at the upper and lower ends of this range.

At minimum, a good investment should produce 25% more income than it needs to pay for its current debts. That shows a healthy income stream, good management, good money-saving habits, as well as other positive attributes that can make a lender more confident in an investment or individual.

But remember that DSCRs can change as companies or entities evolve as well. For example, an investor looking at an investment property with a DSCR of 1.1 might still decide to invest in a property if they have a report projecting that the DSCR should be 1.5 within the next year.

There’s no single ideal DSCR. It all depends on the industry, the asset or company being considered, and other factors.

The interest coverage ratio formula is as follows: 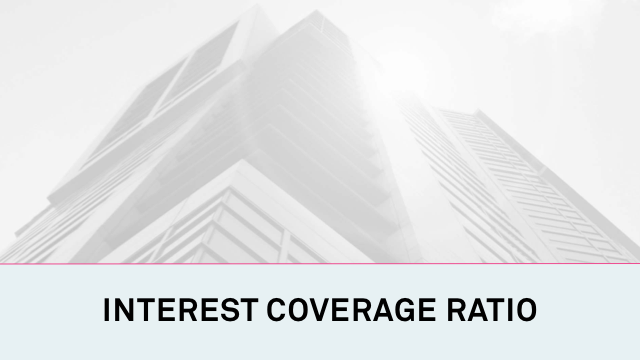 The EBIT is the operating profit minus overhead and operating expenses like rent, cost of goods or maintenance, wages, utilities, and more. It essentially calculates the cash available for paying interest payments after all necessary expenses have been taken care of.

As you can see, the DSCR is a little more comprehensive than the interest coverage ratio since it calculates how well an investment can meet both its principal and interest payments rather than just the interest.

Ultimately, the DSCR is a worthwhile formula to have in your back pocket when you want to make a snap judgment about a property before investing in it. However, remember to use other investment analysis tools, including in-depth looks at a property’s revenue streams, projected profits, and more, before making a final decision.